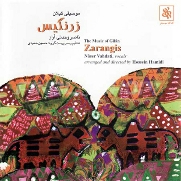 Song that you here in this album, except “Siâ Abrân” and “Ye Ghal Do Ghal” (which are composed by the famous poet and songwriter from Gilân, Morteza Karimi), are folk songs of the female farmers working in paddy fields and farms, songs of tea farms and gardens all around Gilân, Lullabies, ceremony songs of men and women, songs which are sung during the transportation with horse and mule in the mountainous routes and songs from foresters. These songs are folk songs of different regions of Gilân from the foretime.
These songs have been preserved orally in the musical culture of Gilân during the decades and there isn’t any known composer, songwriter of poet for them. Lyrics mostly illustrate the excruciating life, unending disasters, disappointed loves and small joys. Although these songs truly reflect the disasters and tragedies, their melodies, even in the saddest songs are much appealing and pleasant. This sensible happiness is permanently flowing in the songs and is a feature of the folk music of Gilân.
Musicians and the singers of Shemshal Ensemble have revived the music of Gilân by performing this album under supervision of Hossein Hamidi in different cities like Tehran, Sari and Gachsaran.
In this album the folk music of Gilân has been arranged using the traditional music instruments of this region. This album has excited the young fans and music lovers of Gilân. I hope other musicians and singers become inspired by the way this album was produced, till the music of Gilân become popular more than ever.