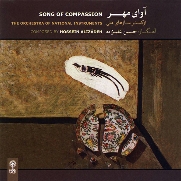 The music in the present collection has been composed in two different atmospheres. The first part consists of five pieces, rooted in Iranian national music. Focusing on his perceptions of indigenous and traditional melodies, the composer has created a magnificent and novel blend, which, admittedly, is not such a facile goal to achieve.
“Zendegi” (Life), “Tolū” (Dawn), “Omgh-e Fâje'e” (The Depth of Disaster), “Âvâ-ye Mehr” (Song of Compassion), and “Orūj” (Ascension) are the five pieces each of which, having its own title, seems to be an individual composition. Yet, all these pieces, as a whole, demonstrate the impression of a single entity, known as life, on the composer.
The first three pieces-and particularly “Omgh-e Fâje'e” express the composer's emotional response to the earthquake as a natural disaster. “Zendegi” is a mixture of rhythmic mobility and sounds of indigenous instruments which displays movement, struggles and euphoria of life. “Tolū” is reminiscent of daybreak and a commencement of life. “Omgh-e Fâje'e”, with its dual drum beats and the time intervals between the two beats, creates a state of fear and void which is intensely representational. Right through the dolorous music, seeking to fill the emptiness, the vocal appears and weeps an affliction. The dual beats which seem to represent a human's or the earth's heartbeats, revealing a calamity, go on and on, and the music remains floating between submission and remonstrance against the disaster. It is hardly conceivable that our national music could reach this level of representation and delineation. In “Âvâ-ye Mehr”, the music, in the form of an extended chord, prepares the ground for the vocal to enter. The wordless vocal has an equal share as that of every instrument, mingling with other sounds in the piece. This way of employing the vocal is to present a celestial sound-a sound from heaven. “Âvâ-ye Mehr” is a healing and seeking sound which shares an emotional and tragic bond with “Omgh-e Fâje'e”. “Orūj” is to some extent reminiscent of the first piece. The percussion and wind instruments display a fresh and original form of music. Human voice appears without words as if the vocal, contrary to tradition, functions as an embellishment to the instrumental. Although, in the present collection, the influence of indigenous music on “Alizadeh”s work is undeniable, it can be appreciated by audience of all sorts-indigenous or not.
The second part consists of two pieces, namely, “Osiân” (Transgression) and “Royâ” (Dream). In “Osiân” the composer has been inspired by and exploited the potentialities, techniques and innovations of Western music. In the style of those romantic composers influenced by the genuine and deep-rooted culture of their own land, he has created a representational and neo-romantic work which, as a whole, is pleasing and marvelous both to the Iranian and non- Iranian ears. “Osiân” is seemingly inspired by Béla Bartók's “Music for Strings, Percussion and Celesta” and an appropriate response to it. In “Royâ”, firstly, the harp prepares the ground, presenting a motif to be performed by the flute. This motif evokes a state of anticipation, and as it continues moving, the Flute plays another short motif which is repeated two or three times, and, eventually, the piece comes to its endless finale with an upper extended note accompanied by arpeggios on the harp.
On the whole, “Alizadeh”s texture of music, his choice and way of blending the instruments and the potentialities he has benefited from produce a representational effect, and this is undoubtedly the result of his distinctive long-term experience in the realm of musical composition.