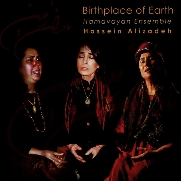 Iran is a land of immeasurable diversity, geographically, historically and culturally. Tens of languages and countless dialects fill its borders North to South, East to West. The diversity of the music between and within these cultures speaks of the considerable historical development of the respective regions.
The role of women in the lives and thus cultures of these regions is proportionally large as it is clear that the burden of managing and overseeing their social lives has historically been on their shoulders too. It is perhaps for these reasons that mostly women have historically influenced the music that has developed in every one of these regions.
Women, as mother, mates, workers of the land, producers of crafts, repositories of myths, stories and histories, foci of all joy and sorrow, every setback and overcoming, play central roles. Most of the music, though different in melodic forms and structural composition are varied, have much in common in their essential content such as lullabies which are the most intimate and trusted dialog between mothers and their children. They express hopes, promise the end of desperation’s and arrival of eternal security. Similarly, the different corpuses of music for weddings and other specific joyous ceremonies were universally developed, composed and performed by women and reflect the woman’s personal and social voice. They sing of hope and the promise of turning fortunes. Most of them have the form of intimate dialogs between friends, of deep prayers, or are daring (militaristic) in tone and optimistic in defeating obstacles. Of important note is the focus of all lyrics on hope as the antidote to all sorrow, pains and disappointments.
In this work I focused on three specific and contrasting regions, the North (Mazandaran), the South (Qashqai) and the West (Kurdistan). It is clear from the lyrics of these selected ancient songs that they take their forms from the woman’s voice and are meant to be performed by female vocalists. Each one is imbued with centuries of histories, tales and myths. Every one these regions is rich in musical forms that are performed in its unique language and the multitudes of dialects within it. Mazenderani is a dialect of Persian. Qashqai is a strong and unique dialect of a linguistically Turkic language, while Kurdish is part of the Northwestern subgroup of Iranian languages, with close similarities to Lori and Bakhtiari dialects.
I selected the final songs from amongst the myriad of the collected body of music with one common theme, hey all represent stories of life, from birth to death and eternity. This helps focus on the important point that several songs from these three regions have strong common structural themes. They sing of myths, tragedies and their meaningful lessons or results and finally the harmony of life. Each region’s music, in its own way, has in common with and shares in the others’ sorrow, pains, hopes and joys. This work is meant to fulfil the goat of a compilation that focuses on tale of the mothers of earth, mothers who culture the earth, nurture society and creativity and express life as an eternally fascinating story.