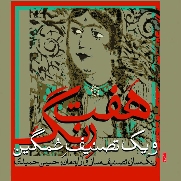 Composed and Arranged by Hossein Hamidi

I wanted to draw the attention again to “Reng”, which is a forgotten form of the Iranian traditional music, while its actual practical role has been neglected in our time.
Reng is one of the many Iranian musical forms such as; Pish-Darâmad, Dar-Âmad, Goosheh, Châr-Mezrab, Tasnif, etc… and has its own specific function, just like the others.
Reng has a great tendency to produce joy and delight, therefore it is one of the suitable musical forms for dance in Iran.
Although Reng was and still is one of the most well known and accepted musical forms in Iranian national and traditional music, sadly it has been distorted in the most kitsch way outside of Iran under the name of “Los Angelesi”! music in the past three decades.
“Tasnif” which is a song in Iranian traditional music, used to be performed by one musician, as the composer of the music and the lyric and as the player and the singer himself. Like “Ashiq” and “Bakhshi” who did these three tasks together all by themselves.
May these forgotten musical forms come to life back again, in more delight and beauty.

Seven Pieces for Dance and One Melancholic Song