Kurdistan is truly a rich reservoir of folk music, partly because of its population and his diverse demographic characteristics and partly because of its enduring musical exchange with other cultures during past centuries. As a result the music of Kurdistan displays signs of polystylism which corresponds to its geographical distribution, however the music of each separate region is quite identifiable from those of other regions. All these different styles of music are characterized by ethnic traits. Nowadays because of modern communication and also economic development in the whole region many of them are beginning to be forgotten or at least they undergo deep changes. But even now there are regions with authentic music traditions, never losing the original function of music in everyday life. The present recording displays a combination of Hawrâmâni, Bâdini, Sorâni, Mukriyâni music tradition as well as some examples belonging to the periphery of Sanandij.
Hawrâmân, a mountainous region is restricted from east by Sanandij, from west by Shahr-e Zur in Kurdistan of Iraq, from north by Marivan and from south by Javanrud. Music of Hawrâmân with more than four millennia of tradition is mainly a lamentation on the sorrow and grief of a nation rich in their cultural heritage, a place of rituals and rites of exceptional beauty. Of its most important forms are Siah-Chamâneh, Chapleh, Darei and Gushi. The Song of Siah-Chamâneh is a favorite one, usually regarded as the oldest living song. Chapleh (=hand clapping) is heard in weddings.
In the north of Kurdistan lays Bâdinân region, a part of which is in Turkey and Syria. For the people there Lâwuk is extremely important. A type of love songs, a relative of which is called Heyrân in south and middle Kurdistan. Heyrân is now more prevalent in Mukriyan (Mahabad and its periphery) than other regions.
Maqam plays a special role in the Kurdish people. Its rich diversity is an evidence of its gradual development in the course of centuries. Other major Maqams in this region are Allâh-Veysi, Qatâr, Khâukar, Nây Nây, Khorshidi and Sahar.
Another feature of the present recording is its entailing of some composed pieces on Kurdish lyrics, sometimes known as Gurâni. Gurâni is one of the most important form of Kurdish music, constituting its major part. We tried our best to use authentic instruments to create its original sonority. At same time we were beware not to play old Gurâni Tasnifs again.
We hope to have contributed to the rich treasury of Kurdish music. 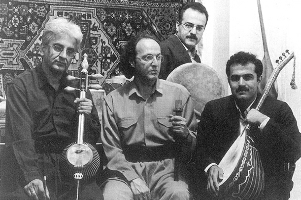 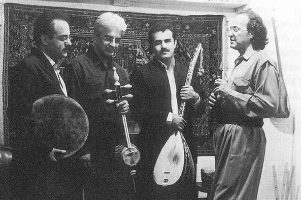